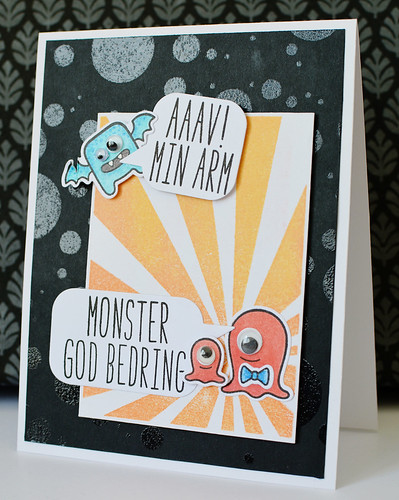 A few months ago Bertram injured his arm and I wanted to send him a little get-well-soon-card. I had just done a get-well-card for the Norwegian stamp magazine, Ett Trykk where I used Lawn Fawn’s Monster Mash and I liked the idea so much I used them again. I love the idea of wishing someone Monster much better health (works better in Danish than in English though). I heat embossed circles of various sizes on the black background just to give it some interest and then I build my scene on top of Neat and Tangled’s Sunburst stamp. 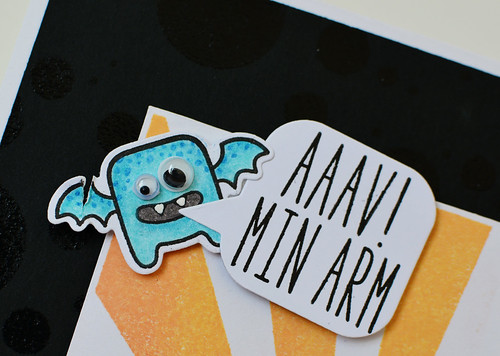 Since Bertram almost (but not entirely) broke his arm, I decided to have the little flying monster sport an almost broken arm. He is saying “Ouch! My arm” which is actually also a saying from Danish television’s most loved series, Matador. 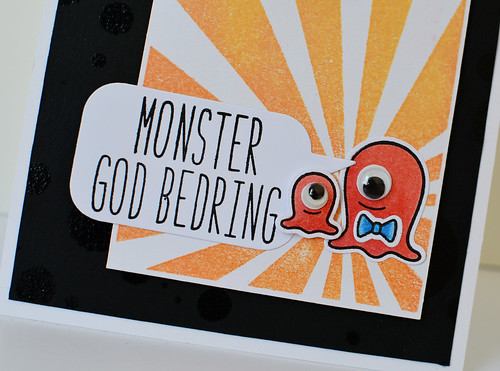 The larger of the two monsters are then wishing that Bertram feels monster much better (again: just works so much better in Danish). Of course all three monsters were supplied with googly eyes – they just seem absolutely right for these cute monsters. For both of the speech bubbles I’ve used Papertrey Ink’s Bubble Talk Dies.

This entry was posted in Ubesluttet and tagged Bertram, diecut, embossing, kort, Lawn fawn, Neat and Tangled. Bookmark the permalink.